“Christ will come and show everyone”

This graffiti is scribbled on the Tel Aviv end of bus line 480 – Tel Aviv-Jerusalem. It is there for a few years already and now i finally took a picture of it. It is one of my favorite pieces of street art, ever.

I just watched Woody Allen’s Bananas, his second best after Crimes and Misdemeanors.

There’s that great scene, where the victorious rebel leader declares himself the new president and proclaims that the country’s new official language will be Swedish. His rebel collaborators immediately decide that he lost his mind.

And then i read this:

Malaysian row over word for ‘God’

A church and Christian newspaper in Malaysia are suing the government after it decreed that the word “Allah” can only be used by Muslims. (BBC)

The difference between humans and computers is that our uptime is a function of our downtime.

I want a really long vacation, right now, and then i’ll be incredibly productive.

On the more serious side, i appreciate this kind of vision. Scchwartz speaks about more than business – he speaks about the little things that make up the big business.

Understand that family – is constant work that needs to be invested in.

Seeking a young lady from Ethiopia , that can give birth the four children.

Love is so simple, to quote a phrase,
You’ve known it all the time, I’m learnin’ it these days.
Oh, I know where I can find you, oh, oh,
In somebody’s room.
It’s a price I have to pay
You’re a big girl all the way. 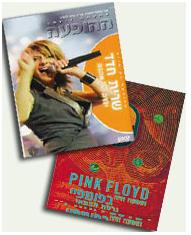 Some salesman put Pink Floyd and Sarit Hadad on one banner, which advertises a DVD sale.

In Wikipedia there are articles in eight languages about Sarit Hadad. This seemed weird at first, but the reason for that is probably that she appeared in the Eurovision song contest. Reading about Hadad in German and Hungarian is very sobering, even though i don’t understand either of those languages.

The politics mostly make me sick and i don’t really like to write about it. But sometimes things happen, which are so unbelievably stupid, that i’ve gotta tell something about them.

There are new billboards popping up all over Israel: “Olmert, let us return to Israel! Eighty thousand settlers are living in danger on the other side of the fence.” And in the corner a small sign says – “One Home movement” (Bayit Echad, בית אחד).

For some reason i can’t find their website, but Bayit Echad is a movement of Israelis that claims to be social and non-political and its stated goal is to help the settlers that want to leave their homes in the settlements in Samaria to get a fair compensation. This is a lie, of course: I know that Avshalom Vilan from Meretz is one this movement’s leaders.

Now – of course they are entitled to their opinions. It’s their right to claim that destroying flourishing villages is their idea of “peace”. But this billboard is simply stupid. The first stupid thing is that no-one is making it so hard for those people to move to another home. Of course it might be expensive and complicated, possible more complicated than moving from Jerusalem to Haifa, but it’s not illegal; There is no Soviet-style “propiska” here and Olmert doesn’t have to “let” them do it.

Another problem is the danger. Yes – they are living in danger and if they run away from it, will the danger go away? Taking care of that danger is called “occupation” by the people who put up those billboards.

Another weird thing is saying “return to Israel”. They already are in Israel. This is the reality – the UN may claim otherwise, but in practice the settlements are a part of Israel: They are de-facto in the jurisdiction of Israeli courts, Israeli police has stations there and their mayors report to the Israeli Ministry of Interior. Again, the Bayit Echad are entitled to their opinion, but if they think that this kind of propaganda is a way of convincing the general public that the settlements are not a part of Israel, they are simply wrong. It is similar to Lubavitch Hassidim saying “may he live to see good days” instead of “peace be upon him” about their late Rebbe – it’s a natural part of ideology for them and a sad joke for almost everyone else.

And of course, there’s the matter of the fib: It’s not a settlers’ organization that is putting up those billboards, so they can’t say “we”. There is one guy from Karnei Shomron (nonstandard; see also Wikipedia) that is interviewed every now and then as part of this ridiculous PR campaign, but common sense says that he doesn’t represent any significant group of settlers.

Anyway, i hope that it will turn out to be a “you cannot fool all the people all the time” thing, but unfortunately these people have collaborators in the media, so more ugly and stupid surprises may lie ahead.

There is no Microsoft Internet Explorer.

# me on social networks